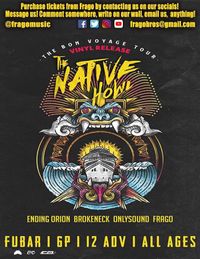 The Native Howl at Fubar

"The Native Howl writes, records, and performs a wide variety of genres and styles of music, the most notable of which being their newly-coined "Thrash Grass," the combination of the intensity and aggression of thrash metal with the melodicism and precision of bluegrass.

Taking a stand against the seemingly unscrupulous status-quo of the music industry, The Howl created their own label Clean as Dirt Records and recording facility C.A.D. Studios through which they release their music and media independently, thereby steering clear of non-creative adulterants.

Their acclaimed 2016 E.P. "Thrash Grass" was followed by a double-length album "Out of the Garden and Into the Darkness," peaking at #3 on the U.S. Bluegrass Billboard Charts."